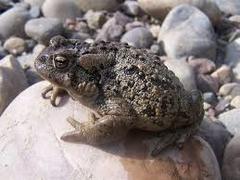 Identification and Biology
Boreal toads (Anaxyrus boreas boreas) are a subspecies of the widely distributed Western toad.  These are an uncommon species of toad found in the mountainous regions of the Western United States. Once found to be widespread and common at high elevations, their population has been on the decline for the past decade. There is a variety of reasons for this decline, including the introduction of chytrid fungus (Batrachochytrium dendrobatidis) into mountainous habitat.  The boreal toad is listed as a state sensitive species in Utah, and populations of boreal toads found in other states are listed as federally endangered.
The toads are gray or greenish with dark blotching on the back and belly.  Both sexes of this toad have warty skin, oval paratoid glands, and a light mid-dorsal strip (which is more prominent in females). The paratoid glands are located just behind the eyes; when agitated, the toad releases a poison from these glands that can inflame the throat and eyes and cause nausea.  This toad hibernates in the winter and emerges in the spring when the snow melt has opened up their burrow and the temperature is above freezing. Male toads don’t go farther than 984 feet of their breeding sites, but the female will go as far as 2.4 miles away. The male toad can grow up to 3.7 inches long and rarely exceeds this. The female toad grows up to 4.3 inches long. Boreal toads escape threats by jumping into a body of water and diving all the way to the bottom.
Habitat
The Boreal toad lives in high elevations between 5,150 to 10,500 feet.  They live in many different aquatic habitats and are often found away from water.  Toads reproduce by laying their eggs in aquatic habitats.  For Boreal toads, this includes slow streams, marshes, lakes, beaver ponds, and alpine meadows. Waters with sloped banks are preferred. In the winter, toads use mammal burrows or beaver dams to hibernate through the cold season.  In some areas, many toads hibernate together in one hole; this is called a hibernaculum.  During the summer, toads may use burrows to prevent water loss during the hot, dry months.  They enjoy a variety of food, including ants, beetles, spiders, moths, worms, and other small invertebrates.
Mating and Growth
Breeding can start in April or in July/early August. Mating is triggered by warmer weather and snow melt, so lower altitudes start early and higher altitudes start later. Depending on their physical health females may skip one to three years between mating attempts. Males actively search and find females randomly; they have no vocal sack which means they do not have a mating call. In the breeding pond a female lays between 3,000 and 10,000 round black eggs where the sun reaches it the most. The development of eggs and tadpoles is temperature dependent. The eggs are contained in two viscous strings and generally hatch within three weeks. Tadpoles develop into young toads (metamorphs) in 2 months.  Therefore, the locations where toads lay their eggs must have water for at least 3 months.
Conflicts
Chytrid Fungus infection. There are around 1,000 different species of chytrid that live in water. The kind that infects amphibians’ skin is called Batrachochytrium dendrobatidis. This particular strain is very unique because it is the only currently known chytrid to infect a vertebrate animal. It is a parasite and is believed to be largely responsible for the decline in boreal toad population. This parasite causes many of the infected toads to develop a disease called chytridiomycosis. Essentially this disease causes the skin of the toad to become very thick inhibiting the ability to absorb water and electrolytes through the skin. Because of this inability an imbalance of electrolytes happens causing the heart to stop. As a result toad populations have been dramatically reduced.
What can you do to Help the Boreal Toad?
Chytrid fungus is one of the greatest threats facing the toads. Other dangers include trampling of the toads and the destruction of their natural habitat. You can take steps to reduce the spread of Chytrid fungus, the trampling of toads, and the destruction of their natural habitats. In the face of all the threats to their survival Boreal toads need all the help they can get. Please do your part to help this unique species repopulate.
References
​Hogle Zoo.  2016. Boral Toad.  Accessed on September 27, 2016 <https://www.hoglezoo.org/meet_our_animals/animal_finder/Boreal_Toad/>
Pessier, A.  2016.  Chytrid Funugs.  Accessed on September 27, 2016.  <http://www.amphibianark.org/the-crisis/chytrid-fungus/>
State of Utah. 2006.  Boreal Toad (Bufo boreas boreas) Conservation Plan.  Publication Number 05-37.  Accessed at <http://digitallibrary.utah.gov/awweb/awarchive?type=file&item=9767>
Wrigley, M. (2008). Boreal Toad (pp. 1-6) (United States, US Forest Service, Salida Ranger District).
Back To Amphibians