U. S. Survey of the Public Knowledge and Opinions of Free-Roaming Horses and their Management

Why Did We Conduct a Survey?

​The most famous herd in Utah, the Onaqui Mountain herd in Tooele County, is advertised as a popular tourist attraction (wildhorsetourist.com). Meanwhile, horse herds in Millard, Beaver, and Iron County, Utah annually create conflicts for livestock producers and wildlife managers.
Several National Research Council reports (1980, 1982, 2013) highlight the need for research into the social context of horse management, particularly studies that evaluate what aspects of horse management are supported by the public. The information gained from such inquiries could be incorporated into methods to manage horses that also engage public stakeholders. Once decision makers (i.e. public land management agencies, state and local government representatives) understand the different levels of knowledge and opinions of public land management, horses, and horse management options, they can begin to strategically engage a diversity of backgrounds and viewpoints toward creating a management plan that would be supported by most of the public (National Research Council, 2013).

​In 2019, the Cooperative Extension System and Agricultural Experiment Stations in Utah and Nevada initiated a Rapid Response Team to focus on free-roaming horse and burro management. This team is made up of specialists from 5 western states that study free-roaming horse biology, ecology, and management, rangeland ecology, and human-wildlife conflict management. The goal of the team is to provide service and momentum to aid the Bureau of Land Management and the US Forest Service in creating a successful free-roaming horse management program for the future. A subcommittee was formed to create a national public survey to gauge the public’s knowledge and opinions of wild horses. Members of the State of Utah, the Bureau of Land Management Wild Horse and Burro Program, and the US Forest Service regional ranger, and scientists involved in studying free-roaming horses reviewed and supported the survey prior to its launch.

Additionally analyses are ongoing and will be reported as they are finished.

Our goal was to obtain at least 400 responses from each of the 5 regions of the US. We obtained at least this mean in 4 of the 5 regions, in the Southwest we obtained 94% of our goal. We used 3177 responses for our analyses. We measured the influence of each of these demographic questions to each knowledge and opinion question asked in the survey.

U. S. Knowledge of Free-Roaming Horses 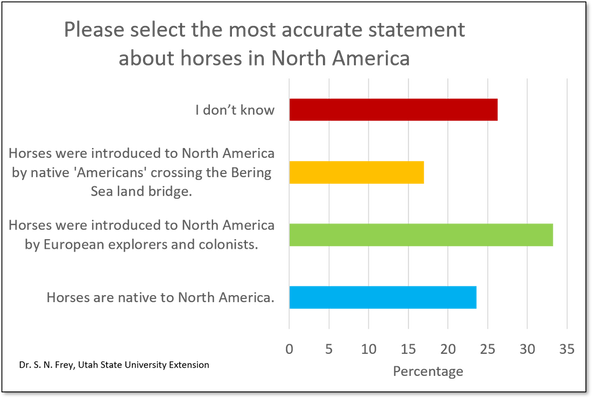 Native or Not? Originated or Native?

Horses and burros are not native species of North America; the plants and animals that live in North America have not evolved with them as part of their community. This can be a tricky concept to understand because the Genus Equus originated in North America - so all horses are descendants of the original Equus, although these ancestors looked quite different than horses today. The genus Equus died out in North America 10,000 to 6,000 years ago, although members of this genus continued on in Europe, Asia and Africa and eventually evolved into today's horses, donkeys and zebras.

For at least 6,000 years humans have domesticated horses (Equus ferus caballus) and donkeys (Equus africanus), breeding them for certain characteristics, such as: small and durable donkeys to be used to haul food, Andalusian war horses, light and fast Arabians, and smart Spanish barb horses. This domestication also selected for horses that were easy to train. Through domestication, the association with the wild horse and its ecosystem was disrupted and horses became semi-reliant on humans for food, shelter and water. The only horse species that has never been domesticated or had selective breeding is the Przewalski's horse, that lives in central Asia. It is considered by scientists to be the only truly wild horse species living today.

In summary, even though Equus originated in North America, any species of this genus died out at some point. The Equus relatives brought to North Americans by Europeans and Asians were not the same animal that had once lived on the continent 10,000 years ago. Thus Equus ferus caballus, the horse as we know it, is non-native to North America. Furthermore, this subspecies has been manipulated by humans for over 6,000 years; this generally means an animal is no longer wild. Any individuals of this species in North America, even if they never have human contact, are ecologically considered feral. The species' long history with humans makes them generally 'tameable', which is how we have a Wild Horse adoption program.
Survey Responses:  Most participants did not know that horses (Equus ferus caballus) were introduced to North America by European explorers, missionaries, and colonists. For the US public to understand free roaming horse management, they must understand the natural history of this species.
Wild, Feral, or Free-roaming?

Wild, feral and free-roaming are all scientific terms that are used to refer to horses that are not cared for by a person or a group. Biologically, ‘wild’ refers to a species of animal that has never been domesticated, like elk, deer or pronghorn. Because the horses that we know today have been domesticated for thousands of years, as a species, they are not truly wild. However, some people refer to horses that are descendants from the European explorers as ‘wild’ because they have lived freely on public lands for generations. Perhaps a better term would be 'naturalized'?

The term ‘feral’ refers to an animal that was once domesticated but has since been returned to the wild. For example, a person may own a horse for several years, but for personal reasons decides to release that animal onto public lands (note: this practice is illegal). Horses are not native to North America. All horses that currently live on public lands are descendants of domesticated animals originating in Europe and Asia; thus, they are technically non-native feral animals. Unlike 'wild' animals, most horses can be captured, adopted, and trained to be tame.

Free-roaming means that an animal is not herded or restrained from moving throughout the landscape. When discussing horses, ‘free-roaming’ refers to all horses that live and move freely throughout the land, regardless of their origin, or how long they have lived without human interaction.

Follow this link for more information about why scientists consider horses 'feral'.
Survey Responses: Fewer than 10% of the survey participants knew that there is currently more than 75,000 free roaming horses on public lands. It is possible that the U. S. public's support of management actions for free roaming horses is influenced by how many horses the public thinks exists.
Competition for Food and Water

The public lands where free-roaming horses live, including HMAs and HMTs are also commonly referred to as ‘rangelands’. Many of these areas are high-desert shrub and forest ecosystems that have hot, dry summers and cold, snowy winters. Most of the rangeland vegetation in the U. S. consists of grasses, sagebrush, other shrubs, and small trees. Free-roaming horses share this land with native wild ungulates (hooved mammals) including pronghorn (Antilocapra Americana), mule deer (Odocoileus hemionus), elk (Cervus canadensis), as well as many other mammals, reptiles, and birds. Because free-roaming horses occupy the same habitat as many wildlife species, interactions between free-roaming horses and wildlife are inevitable. Horses are larger than many native wildlife species, so they can be strong competitors for limited resources such as food, water, and shelter. This raises concerns about the ability of horses to out-compete wildlife for food or to change the rangelands to the point that they aren’t suitable for native wildlife species.  For a discussion of how these conflicts might happen, please read this short document.
Survey Responses: Most of the survey participants somewhat or strongly agreed that free roaming horses compete with both native wildlife and domestic cattle and livestock for food and water resources on public lands. More than 30% of the respondents had no opinion about the statement, suggesting that they either didn’t care or they didn’t know enough about the topic to have an opinion

Where Do Free-Roaming Horses Live?

The majority of free-roaming horses are managed in Nevada, California, Oregon, Utah and Wyoming. The Forest Service manages approximately 7,100 wild horses and 900 wild burros on 53 wild horse and burro territories on approximately 2.5 million acres of National Forest System lands in 5 Forest Service regions, 19 national forests, and 9 states. Of these 53 territories, 34 are active and 19 are inactive. Of the 34 active territories, located in Arizona, California, Montana, Nevada, New Mexico, Oregon, and Utah, approximately 24 are jointly managed in cooperation with the Bureau of Land Management (BLM) wild horse and burro program. Most of these jointly managed territories are in Nevada. Click the photo of USFS Herd Management Territories to learn more about their program. The BLM manages wild horses and burros in 177 herd management areas across 10 western states.  Each HMA is unique in its terrain features, local climate and natural resources, just as each herd is unique in its history, genetic heritage, coloring and size distribution. For example, BLM Nevada manages 83 wild horse and burro herd management areas on approximately 15.6 million acres. The combined appropriate management level for all HMAs in the state is 12,811 animals. Click on the photo of BLM Herd Management Areas to learn more about their program.

Many people incorrectly think that depredation can and does regulate population numbers of wildlife species; that predators are killing surplus animals and creating an equilibrium in the ecosystem. Perhaps this is why many of our respondents agreed with the idea of letting nature take its course.  Unfortunately, predators controlling a population is rarely reality. More often, population numbers are regulated by food availability. Carrying capacity is achieved through starvation, dehydration, disease, and depredation. Starvation and dehydration is the greatest risk for many horse herds. Most range managers do not consider it humane to allow horses to starve to death or die of dehydration. Each years, millions of dollars of taxpayer money is used in emergency round ups to save horses that are in near-death conditions.
READY FOR MORE INFORMATION? LET'S DISCUSS PUBLIC OPINION. CLICK ANYWHERE TO MOVE TO THE NEXT PAGE

Last Update February 2022: This site is under construction. We are adding data graphs monthly. Check back soon to view more survey results.