​Biology and Identification
The desert tortoise (Gopherus agassizii) is Utah’s only native tortoise. Their range inhabits the Mojave Desert, and spans from the lower tip of California, up to the southern half of Nevada and extending into southern Utah in Washington County. The Desert Tortoise typically weighs between 8 and 15 lbs, reach 9-15 inches in length, and 4-6 inches in height. The Tortoise’s shell is a tan or taupe color with concentric, dark rings on each enlarged scale: called scutes. Their stocky limbs are also covered in scales that help protect their body from attack, and from water loss.
Amazingly, Desert Tortoises can live up to EIGHTY YEARS! The typical lifespan for these tortoises is between 50-80 years, with sexual maturity occurring from 15-20 years old.
​Desert Tortoises mate in the spring months, where after a female tortoise will lay 4-6 eggs in a burrow she dug into the ground. Interestingly, the sex of the offspring is determined by the heat of the ground/burrow the eggs are incubated within, not by genetics. This phenomenon, known as temperature-dependant sex determination (TSD), also occurs in other reptiles such as alligators, red-eared slider turtles, and bearded dragon lizards. For Desert Tortoises, hotter temperatures (higher than 88 degrees Fahrenheit) results in females, and cooler temperatures (lower than 88 degrees Fahrenheit) results in males. Once hatched, baby tortoises are around the size of a silver dollar, and grow very slowly at around 12mm per year. 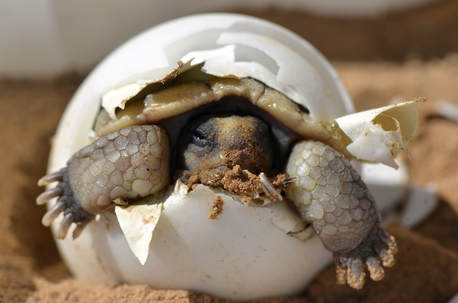 Desert Tortoises are vegetarian, eating mostly desert flowers, fruits, and other plants such as desert grasses like Threeawn. Vegetation in the desert is sparse, thus desert tortoise have very large home ranges for an animal of their size. The minimum annual use is approximately 200 acres; over the course of a tortoise’ life, it can use up to 1.5 miles[2].   Keenly adapted to life in the desert, the tortoise can withstand incredible heat of up to 140 degrees Fahrenheit by burrowing into the earth to avoid the heat. Tortoises spend approximately 95% of their time within their burrows, including hibernation and torpor - a type of hibernation to avoid heat. They can also survive for up to a year without access to water.​
Conservation Status
Because of its slow growth, and its late maturity, desert tortoise populations do not recover quickly when they are impacted. Because of many factors, including habitat loss and non-native predators, desert tortoise populations have declined dramatically in the last 100 years. Additionally, the historical (and continued) practice of keeping wild tortoises as pets decreased the population and spread diseases such an upper respiratory disease throughout regions of critical habitat.
The population of the Desert Tortoise has approximately been reduced 90% since the 1980’s, making sightings of wild tortoises more and more rare. For example, populations are so low in sections of southern Utah that population estimates couldn’t be calculated.  The tortoise is currently listed as a Threatened species by the U.S. Fish and Wildlife Service. With this designation, the USFWS and each state where tortoises occur developed critical habitat areas to protect the remaining populations of tortoises. In Utah, the majority of the critical habitat is contained within the Red Cliffs Desert Reserve.  The reserve was created as a mitigation plan to allow the city of St. George and surrounding towns to expand, while protecting the core habitat of the desert tortoise in southern Utah. Currently, it is estimated that there are 38 to 69 tortoises per mile[2] in the Utah recovery area.
How You Can Help Desert Tortoises References
McLuckie, A.M., M. M. Reitz, and R.A. Fridell. 2007. Regional Desert Tortoise Monitoring in the Red Cliffs Desert Reserve, 2007. Utah Division of Wildlife Resource Publication 08- 19.
Nussear, K.E., T.C. Esque, R.D. Inman, L. Gass, K.A. Thomas, C.S.A. Wallace, J.B. Blainey, D.M. Miller, and R.H. Webb. 2009. Modeling habitat of the desert tortoise (Gopherus agassizii) in the Mojave and parts of the Sonoran deserts of California, Nevada, Utah, and Arizona. U.S. Geological Survey Open-file Report 2009-1102. 18 pp.
Red Cliffs Desert Reserve.  2018. Mojave desert tortoise.  Accessed August 2018 http://www.redcliffsdesertreserve.com/wildlife/desert-tortoise-gopherus-agassizii
Tracy, C.R., R.C. Averill-Murray, W.I. Boarman, D. Delehanty, J.S. Heaton, E.D. McCoy, D.J. Morafka, K.E. Nussear, B.E. Hagerty, and P.A. Medica. 2004. Desert Tortoise Recovery Plan Assessment. Report to the U.S. Fish and Wildlife Service, Reno, Nevada.
[USFWS] U.S. Fish and Wildlife Service. 1990. Endangered and threatened wildlife and plants; determination of threatened status for the Mojave population of the desert tortoise. Federal Register 55:12178-12191.

Photo Credits: [USFWS] U.S. Fish and Wildlife Service. 1990. Endangered and threatened wildlife and plants; determination of threatened status for the Mojave population of the desert tortoise. Federal Register 55:12178-12191.
Back to Reptiles