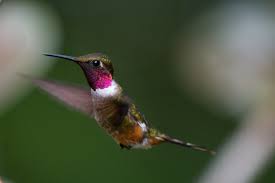 Hummingbirds in Utah
Hummingbirds only occur in the western hemisphere (Mayr, 2005). While most of these species live in tropical climates, there are many that migrate into the US during the summer months. Several species breed and spend their summers in Utah and the southwest US. The black-chinned (Archilochus alexandri), broad-tailed (Selasphorus platycercus), and calliope (Stellula calliope) hummingbirds are commonly found in Utah in summer months (www.birds.cornell.edu). Anna’s (Calypte anna), Costa’s (Calypte costae) hummingbirds are found in the southwest, but are rare in Utah (Baltosser and Scott, 1996); magnificent (Eugenes fulgen) and blue throated (Lampornis clemenciae) hummingbirds sometimes breed in the southwest, but do not spend time in Utah (www.birds.cornell.edu).
How Hummingbirds Eat
Hummingbirds’ primary food is flower nectar, a sugary liquid created by plants to attract pollinators (Hainsworth & Wolf, 1976), but they will also eat small insects and spiders in order to get the protein that they need. They have some special characteristics that allow them to drink nectar while hovering next to flowers. Hummingbird tongues are split on the end (Figure 1) and lined with lamellae (small hair-like structures). This creates two grooves in the tongue that trap nectar inside when the lamellae close over the top of the grooves. The movement of the tongue from the nectar into the air triggers the lamellae to close. The tongue is then pulled back into the mouth by special muscles (Rico-Guevara & Rubega, 2011). The structure and movement of the tongue into flowers is specialized to improve their ability to harvest nectar.
Special Flight
Hummingbirds are able to move their shoulders 180; degrees this allows the wings to move in a sideways figure eight pattern (Warrick et al., 2005). The leading edge of the wing is composed of thin primary flight feathers that minimize the thickness and increases the lift (Warrick et al., 2005). The ability of hummingbirds to move their wings 180 degrees creates almost continuous lift while the bird is hovering. This also allows hummingbirds to fly forward and backward (Warrick et al., 2005).​ 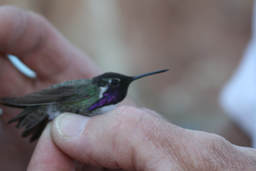 Attracting Hummingbirds
Hummingbirds choose flowers with high nectar production made up of high concentrations of sucrose (Hainsworth & Wolf, 1976). Independent of nectar production and concentration, hummingbirds always chose the highest energy food source (Stiles, 1976). Flower colors with long wavelengths that contrast with the background are easily visible to hummingbirds, for example, red or orange flowers against dark green vegetation or yellow flowers against a blue vegetative background (Barker, 1961). There are many species of plants that you can choose for your landscape and garden that will naturally attract hummingbirds. Planting a variety of these plants, choosing those that flower at different times throughout the summer will ensure that you attract hummingbirds all summer long. Once they are in your yard, you will have the pleasure of watching their natural behaviors such as mating displays, defending a favorite shrub, and maybe even provisioning their young!
Table 1: A few native plants that will attract hummingbirds*.
* more information on each of these plants can be found at http://plants.usda.gov.
Concerns of Hummingbird Gardens
One concern of biologists is the ability of plants to cross-pollinate (pollen of one plant species is deposited on the stigma of a different plant species). Pollen from related species often competes and decrease seed set of native plants (Brown & Mitchell, 2001). For example, in wetlands, the invasive purple loosestrife competes with the native winged loosestrife (Brown & Mitchell, 2001). The pollen from purple loosestrife has been shown to clog the stigma or style of winged loosestrife flowers preventing pollination by other winged loosestrife flowers( Brown & Mitchell, 2001). This clogging reduces the seed set of the native loosestrife and reduces the numbers of the next generation (Brown & Mitchell, 2001). Pollen from similar species of invasive plants has also been shown to have alleleopathic (chemicals produced by some plants that limit or stop natural processes in other plants) effect on the pollen of the native plant. Invasive pollen could also prevent the native pollen from attaching to the stigma and the invasive pollen would fertilize the ovules before the native pollen had a chance (hybridization) (Brown & Mitchell, 2001). This is important because invasive species are one of the leading causes of habitat disturbance and loss of native diversity (Brown & Mitchell, 2001). Therefore, please select your landscaping responsibly; with such a great diversity of native seeds and plants available in today’s market, there is no need to spread non-native plants in order to attract hummingbirds. Please visit this link (native plant nurseries) provided by Utah State University Extension to find a distributor near you.
References
Baltosser, W.H., and Scott, P. E. 1996.  Costa's Hummingbird (Calypte costae), The Birds of North America Online (A. Poole, Ed.). Ithaca: Cornell Lab of Ornithology; Retrieved from the Birds of North America Online: http://bna.birds.cornell.edu/bna/species/25.
Barker, H. G. (1961). The Adaptation of Flowering Plants to Nocturnal and Crepuscular Pollinators. The Quarterly Review of Biology , 36 1 64-73.
Brown, B. J., & Mitchell, R. J. (2001). Competition for pollination: effects of pollen of an invasive plant on seed set of a native congener. Oecologia , 129 43-49.
Hainsworth, F. R., & Wolf, L. L. (1976). Nectar Characteristics and Food Selection by Hummingbirds. Oecologia , 25 2 101-113.
Mayr, G. (2005). Fossil hummingbirds in the Old World. Biologist , 52 1 12-16.
Rico-Guevara, A., & Rubega, M. A. (2011). The hummingbird tongue is a fluid trap, not a capillary tube. Proceedings of the National Acadamy of Sciences Early Edition , www.pnas.org/cgi/doi/10.1073/pnas.1016944108.
Stiles, F. G. (1976). Taste Preferences, Color Preferences, and Flower Choice in Hummingbirds. The Condor , 78 1 10-26.
Warrick, D. R., Tobalske, B. W., & Powers, D. R. (2005). Aerodymamics of the hovering hummingbird. Nature , 435 1094-1097.
​
Back To Birds