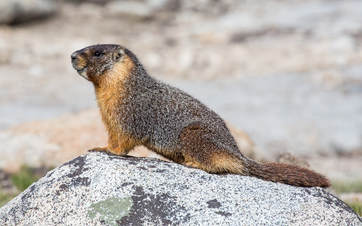 There used to be a time when animal behavior such as awakening in the wintertime would indicate specific times and dates throughout the year for humans to prepare for the changing of the seasons. The month of February brings the tradition of the groundhog and his shadow. He emerges from his hole after a long winter’s sleep to look for his shadow to determine the how much longer winter may last.

There are several large burrowing animals similar to ground hogs here in Utah keep a look out for, like Marmots. Marmots (Marmota spp.) belong to a group of animals called "ground squirrels" which consists of groundhogs (a.k.a. woodchucks; Marmota flaviventris), rock squirrels (Otospermophilus variegatus), and more than 10 other different species. In the western United States the most commonly found marmot is the yellow-bellied marmot (Marmota flaviventris).

BIOLOGY OF MARMOTS
These large ground dwelling critters can be up to two feet in length and can weigh up to 11 pounds. Their body size varies depending on the environment that they are living in. Some marmots live at higher elevation and have to adapt to colder conditions and others live at lower elevations and will adapt warmer temperatures. Because of these adaptations, marmots are found widely across North America.
Marmots spend a majority of their time in the middle of the day and at night hidden in their burrows. When not in the burrow, they are out eating grasses, plants, fruits, and tree bark.

REPRODUCTION AND NATURAL HISTORY
Male marmots will mate with up to three females during their mating season. Mating season occurs around two weeks post-hibernation (May and June). Mother's will carry the young for approximately 1 month, with litter sizes ranging in size from 3-8 pups. The pups venture out of the burrow around 3 weeks old and will soon after be old enough to leave the burrow completely. Yellow-bellied marmots reach full adulthood and sexual maturity at approximately 2 years old, and male offspring are driven out of colonies by their sires, whereas female offspring are allowed to stay in the colony.

HIBERNATION
In winter, marmots hibernate as a strategy to survive the cold months when food is scarce. They will enter the burrow in early October and won’t be seen until the following April or May. Marmots are able to gain a lot of weight in fat during the summer months, that their bodies process for energy through the coldest days of winter. During hibernation, there can be anywhere from 10-20 marmots in a colony which also helps conserve energy during the colder months. Another fun fact about marmots is that during the hibernation period they only need to take one to two breaths per minute!

MANAGEMENT
Marmots have the tendency to make a bad name for themselves if they decide to make their homes on or near land that is being used for agricultural purposes. Since burrowing is a part of their nature, it is most commonly seen as destructive in the eyes of landowners. One control method is fencing the desired area where you want to keep the marmots out. You will want to bury a portion of the fence since they are known burrowers and the top portion of the fence should slant outwards because they are also able to climb. Contacting your local division of wildlife or your local Extension office another great way to obtain information on control methods.