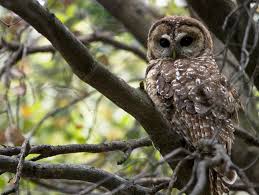 Identification and Biology
The Mexican Spotted Owl (Strix occidentalis lucida) is one of the largest owls in North America, coming in as 5th on the scale of owl size with a wingspan of approximately 43 inches, a height of 45 inches, and weight of 21 ounces! This owl exhibits sexual dimorphism with females being larger than males.
The overall appearance of the Mexican Spotted Owl is chocolate brown in color with irregularly shaped white spots forming what can look like stripes across the owl’s body. The owl’s feathers, with their stripe-like pattern can often be mistaken for hawk or turkey feathers, which have similar patterns.
The amount of white in these spots tends to make the owl appear somewhat lighter in color than other spotted owls. A feature that sets them apart from other owls is their eyes, which are dark rather than yellow like many other owl species.
Mexican spotted owls do not make their own nests, preferring to use suitable sites, like a cliff, or nests made by other species.  Each spring the female lays 1-4 eggs that hatch after about 30 days. Both parents assist with rearing the chicks. Chicks can die from exposure to the elements, as well as suffer predation by Great horned owls. Usually only 1-2 chicks will survive until they fledge 34-36 days after hatching.
​Mexican spotted owls primarily eat rodents, but they have also been known to eat rabbits and other small mammals.
Species Habitat and Range​
The range of the Mexican spotted owl extends from the southern Rocky Mountains in Colorado and the Colorado Plateau in southern Utah southward through Arizona and New Mexico and discontinuously through the Sierra Madre Occidental and Oriental to the mountains at the southern end of the Mexican Plateau. Mexican spotted owls are considered non-migratory, meaning they don’t travel larges distances between summer and winter habitats.  However, they will move to lower elevations during the winter months to avoid extreme weather conditions. 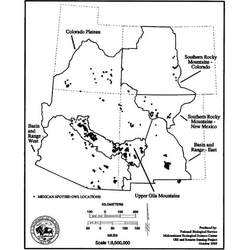 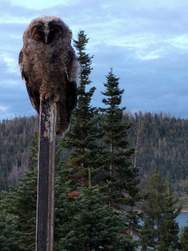