Scorpions of Utah
By Laura Allard and Dr. Frey

​Biology and Identification
There are several scorpion species that live within the state of Utah, specifically the Arizona Bark Scorpion, Giant Desert Hairy Scorpion, Black Hairy Scorpion, and Northern Scorpion; imaged respectively.
Arizona Bark Scorpions
(Centruroides exilicauda) are intermediate-sized scorpions, reaching approximately 7-8cm in length depending on the gender of the scorpion. Females are typically smaller than males by about a cm. Arizona Bark Scorpions are found mainly in Kane County which borders a little over a third of the bottom border between Utah and Arizona.

Arizona Bark Scorpions are adapted for desert terrain, with their coloring matching the lighter-sands of their range, and their bodies coated in a bio-wax that helps prevent desiccation (water loss). These scorpions also seek shelter from the heat under rocks, or under tree-bark, hence its common name. Unlike some scorpions, Arizona Bark Scorpions do not exhibit burrowing behavior, and instead seek shelter opportunistically, including inside human-homes.
​
These scorpions can be formidable creatures, as they have both rather toxic venom, and certain behaviors that make them more likely to come into contact with humans. The venom of the Arizona Bark Scorpion can cause severe pain, vomiting, numbness, tingling, and temporary paralysis of the affected area stung; overall effects can last between 24 to 72 hours. Despite this, fatalities from a sting are very rare, typically only occurring in very small children, elderly, or immunocompromised adults. All of these fatalities can be in-part prevented by immediate and proper medical care, as well as prevention to keep scorpions away from human property.
Giant Desert Hairy Scorpion
(Hadrurus arizonensis) are large-sized scorpions, reaching approximately 14 cm in length. These scorpions are found in extreme Southwestern Utah, mostly in Washington County.

Giant Hairy Scorpions’ large size allows them to eat much larger prey than other scorpions, such as lizards, snakes, other scorpions, and large insects. These too are well adapted to desert habitats with their mostly tan coloring and dark brown/black dorsal side. The scorpion also has many dark-brown hairs protruding from its body that help it with vibration detection in hunting prey and avoiding predators. These hairs are where the scorpion obtained its common name. These scorpions, unlike the Arizona Bark Scorpion mentioned above, do burrow into the soil. They are typically found in low-elevation valleys, canyons, or washes where they create intricate tunnels reaching up to 2.5 meters in length!
​
These scorpions are aggressive, typically lunging at prey/attackers with their large crab-like pincers and stinging quickly with their tail. Despite this scary show of dominance, the Giant Hairy Scorpion’s venom is not very toxic. The sting is said to liken to a honey-bee sting. With this knowledge however, if you are stung and see symptoms of an allergic reaction (excessive swelling, itching, hives, and difficulty breathing/swallowing) seek medical attention, as anaphylaxis reactions can be fatal.
Black Hairy Scorpion
(Hadrurus spadix) are also large scorpions, reaching up to 15 cm in length, and is of the same genus as the Giant Desert Hairy Scorpion. The main differentiation between the two is the completely black dorsal side of the Black Hairy Scorpion, compared to its cousin, who has a more brown and striped dorsal side. The Black Hairy Scorpion is found mainly in Southeastern Utah.
​
These scorpions are very similar to their cousins in that they are also burrowing scorpions, and have similar venomous properties: largely considered non-fatal, but still rather painful. 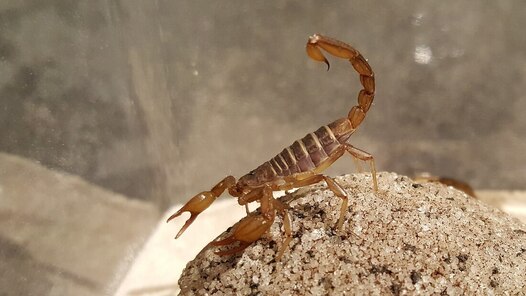 Northern Scorpion
(Paruroctonus boreus) are small scorpions, reaching around 5 cm in length. These scorpions are unique in that their range reaches as far north as Canada. These scorpions can be found all throughout Utah.
​
These scorpions can be identified mainly by their large-rounded pincers and relatively thin tail. Their coloration is usually tan with a dark-brown and striped dorsal side, however in volcanic-stone areas, they can appear darker all over the body.
These scorpions are also low on the toxic scale, with the pain being likened to a hornet sting but with localized numbness for up to an hour afterwards. Usually pain completely subsides within 4 hours of being stung.
Conflict and Prevention
Most conflicts between humans and scorpions occur when a scorpion finds their way into the homes and businesses of humans. Scorpions, like most arachnids are nocturnal creatures, preferring dark and small hiding spaces, of which there can be plenty of in a home. Some scorpions are more venomous than others, but all are more afraid of you than you should be of them.
By taking simple precautions, scorpions don’t need to be a nuisance to you, instead living out their purpose of eating other insects you may like even less! Such as moths, spiders, crickets, roaches, etc.
​
Ways you can prevent scorpions from entering your home and to prevent getting stung:
Inspect the outside of your home for debris and cracks: Scorpions generally only want to be in dark spaces, so eliminate as many of those as you can by    filling in cracks in your walls, roof, around windows, and foundation; as well as removing woodpiles, leaves, etc. from the close perimeter of your home.

Use natural, non-toxic deterrents: Cedarwood oil is an essential oil that naturally repels scorpions without endangering other wildlife or yourself. Mix about 15 drops of the oil to 2 cups water, and spray around door frames and windows to prevent scorpion entry. Lavender is also found to be a natural repellant to scorpions, so using it as an oil or planting it on your property can help prevent them entering your space.

Call Professionals: if you are concerned about a large number of scorpions on your property, it is probably best to consult pest control agencies on how best to remove the problem.

Always Check Your Shoes/Personal Items: If you leave items outdoors or in other susceptible areas to scorpions, make a habit of shaking out your belongings before using them to prevent being stung.

Be Careful When Reaching into Dark Areas: Some scorpions like the Arizona Bark Scorpion can indeed climb walls and hang upside-down from surfaces. Always be wary and check before you reach into dark spaces or under surfaces, especially in more-desert like areas.