Spiders of Utah
By Laura Allard and Dr. Frey

​Biology and Identification
There are several spider species that live within the state of Utah, specifically Black Widows, Hobo Spiders, Wolf Spiders, and Yellow Sac Spiders. Some of these spiders are improperly labelled as dangerous, while others truly pack a venomous punch!

You can easily recognize the female Black Widow spider by its jet-black exoskeleton and a bright red hourglass shape on its large and round under-abdomen. Males are less formidable in appearance, tan in color with small oval-shaped abdomens. The average size of the female is about ½ inch long, and males only half that at ¼ inch long. These spiders tend to build irregularly shaped webs with no geometric pattern and tend to prefer darkened spaces as they are nocturnal. ​
The scary name of this spider is attributed to the behavior of female spiders eating their male counterparts after intercourse: an act known as sexual cannibalism. Interestingly, this behavior is rather rare in the wild, with males choosing mates by detecting whether the female has recently fed or not.

Many people have come to fear Black Widows as they do have a rather potent venom that affects humans. Only female widows have this venom, which is a type of neurotoxin. Unfortunately, the symptoms of these bites are pain, nausea, sweating, swelling, and goosebumps, and in worst cases; fatality. Fatalities in such developed countries like the US are low, and only among young children, elderly, and immunosuppressed populations. ​
Hobo Spiders
The Hobo Spider (Eratigena agrestis) is largely one of the most feared spiders found in Utah. The Hobo Spider falls within the Genus Eratigena, which are considered Funnel Web Spiders. These spiders are not the same as the Australian Funnel Web Spiders who are from a different Genus. Hobo Spiders were not indigenous to North America, being originally introduced to the continent in the 1930’s on the Eastern coast. Over the years, their range has widened stretching down into most of Northern and Eastern Utah.

Hobo Spider identification is rather difficult without use of a microscope, as there are many spiders who bear similar appearance to the Hobo Spider found within Utah, which is demonstrated in the photos below:
Unfortunately, a lot of what makes people so afraid of the Hobo Spider may be misfounded. A nickname of the Hobo Spider is “The Aggressive House Spider” which was coined most likely from is species name agrestis. However, agrestis is Latin for “of the field” much like agriculture means cultivation of the field. This nickname has given the spider a negative connotation for obvious reasons.

​There has also been much fear surrounding the “necrotic” venom of a Hobo Spider. Within the last 10 years, studies have suggested that the Hobo Spider bite is not necrotic, as previously described, and that most previous studies suggesting necrosis from Hobo Spider venom was not studied properly, completely, or with enough prejudice. The original papers citing Hobo Spiders as having a necrotic bite are from 1987, with a sample size of just 5 European White Rabbits. When this study was later replicated, the spiders would not freely bite the rabbits, and when injected artificially with venom, the rabbits showed no necrosis as the paper suggested. Furthermore, there have been no scientifically “confirmed” cases of necrosis caused by a Hobo Spider bite. Confirmation of such a bite would require sufficient study, of which all reported cases have not been, and therefore could be a case of blaming the spider who was in the wrong place at the wrong time.

This means that Hobo Spiders may OR may not be dangerous to humans, but more and more evidence is being mounted against the idea that they are.
Wolf Spiders
There are several species of Wolf Spider that may be found within Utah, all within the Hogna Genus. Hogna are the larger types of Wolf Spiders, including the largest: Hogna carolinensis that has been sighted occasionally within Utah.

Wolf Spiders are unique in that they do not form webs, instead stalking and running down their prey. These spiders are on the larger size, reaching up to 1.38 inches in length. Their bodies are mostly tan with brown and black patterns covering their thorax. They are most easily recognized by their a larger set of eyes, two larger black eyes sit atop four small eyes in a row. These eyes are large enough to shine back when hit with a light source such as a flashlight. They are also unique in that they carry their hatchling offspring on their backs as a way of protection from predators.

Although intimidating, Wolf Spider’s venom is not considered dangerous to humans outside of severe allergic reactions. The bite from a Wolf Spider typically causes mild pain, swelling, and localized itchiness.
Yellow Sac Spiders
Yellow Sac Spiders get their name mainly from their larger, oval-shaped thorax that has a yellowish/tan appearance. They also have a small “heart-mark” found on the cephalothorax close to where it meets the abdomen. This is referred to as a heart-mark as it is above where the spider heart is typically located. 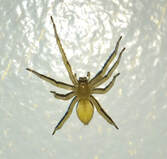 Yellow Sac Spider showing "heart-mark" on abdomen
These spiders are typically the size of a nickel, and are sighted during summer months after their hatching season around April.

These spiders are of true concern if bitten, as their venom is confirmed to be cytotoxic (cause tissue death) and in worst case scenarios necrotic, and they are more aggressive than some spiders, possibly biting more than once if kept in close proximity to available skin.

The first signs seen after a bite from a Yellow Sac are localized burning for up to an hour, and occasionally nausea, fever, stomach aching, and lethargy. The site may develop a dead-skin cap called an eschar, that should fall off naturally after 7 to 10 days. This however must be monitored as infection by bacteria, fungi, or archaea can cause further, more serious health issues.

If for some reason worse symptoms arise, such as difficulty breathing/swallowing, severe vomiting, visual cell death (black/grey skin tissue, loss of tissue), seek medical attention immediately.​
Bite Protection and Management
***One important thing to note if bitten by a spider: capture/collect it for identification! Many spiders look very similar to one another. It is a good idea to collect the spider and have it identified by professionals for both proper healthcare of your bite, and for proper scientific knowledge of spider bites. There is still much to learn about spiders, including ones living close to us here in Utah!***

The easiest way to avoid spider bites is to check storage areas carefully and frequently. Most encounters with these spiders are in garages, basements, attics, storage facilities, pantries, workshops, etc. where there are many cluttered items left alone for long periods of time. Here are other tips to help protect yourself from bites, and keep spiders away:
Of course using a pest control spray service once or twice a year can also help keep spiders away. If you suspect you or a loved-one of susceptible immunity or age has been bitten by one of the venomous spiders mentioned, seek medical attention to asses the bite severity, and apply regular first aid measures such as washing the wound, use of ice to reduce swelling, and use of analgesics as appropriate.